For all our friends and family out there, we wish you a very Merry Christmas! 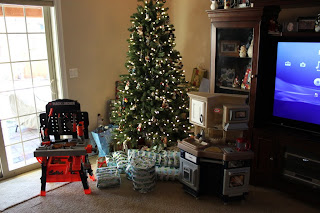 That's a crowded tree! See how all that turned out...

(Video pulled from a Bloggie)
Posted by Brandon at 8:54 PM No comments:

I'm pretty sure Dragon's Lair is the original QTE (Quick Time Event) game. Since I've never actually seen the game's ending, I decided to check it out on the Playstation Network. Even with audio cues and control hint overlays, a few of the sections were really tough! In the end however, I was able to finally view the entire animation uninterrupted. Posted by Brandon at 7:47 PM No comments:

I love to mess around in Photoshop.

Posted by Brandon at 2:01 PM No comments:

To celebrate the Ducks rising to #1 for the first time ever, I have tickets to this Thursday's game vs. UCLA. Well, not entirely true. Since I was going to be in Eugene this week, might as well go right?

ESPN College Gameday at Autzen a couple weeks ago.
Posted by Brandon at 1:30 PM No comments:

My stitching skills need work, but here's a stab at a Crater Lake panorama.

Last night I was working on some graphics for a website that I'm creating. I finished up the layout and previewed it with semi-final artwork. There was just something cold about its presentation, too many harsh edges and straight lines. I really liked the layout but I needed to tweak the artwork - which meant that I had to soften and round their edges. Now normally this would be a repetitive, possibly tedious task in Photoshop. However, after some googling I found two websites that really helped me out. Vector masks are my new best friend!

How to make round image corners in Adobe Photoshop: Vector Masks or Reverse Transparencies.
Posted by Brandon at 3:02 PM 1 comment:

Wow. Where did August go? We just returned from a week-long trip visiting our relatives in San Diego. It was pretty laid back and relaxing. Base-camp was setup at the Sand Pebbles resort in Solona Beach. From there we made hiked down to the beach, explored the USS Midway, and visited Seaworld. Throw in some visits from oft-seen relatives and friends (and some Frisbee golf) and that pretty much sums it up. Check out my picasa gallery if you're interested in the pictures.
Posted by Brandon at 10:35 PM 2 comments:

I just installed the new voice & chat application from google. A test run over our spotty wi-fi connection was surprisingly good.
Posted by Brandon at 8:43 AM No comments:

We just finished up a "tour de Oregon", this summer's family vacation. It all started at Depoe Bay, moved down south to Roseburg, and finished up in beautiful Crater Lake. Some of the trip's highlights:

* Watching wales outside our condo in Depoe Bay.
* Chasing the kids around the Newport Aquarium.
* Sampling the various tasty brews at the Rogue Brewery in Newport.
* Exploring the Sea Lion Caves near Florence.
* Driving through the Wildlife Safari in Winston.
* Sunset vistas on the rim at Crater Lake National Park.

This was the first, real opportunity to put our new Canon T2i DSLR camera to work. All I can say is "wow", but you be the judge.
Posted by Brandon at 10:28 PM No comments:

Aaron, Allison, and I recently finished a 20 mile loop in the Strawberry Wilderness. Among the many highlights were Slide Lake, High Lake, Strawberry Mountain, and Little Slide Lake. Check out the image gallery to see pictures I took of the trip. I also found this video, which my hiking partners are in (3:15).
Posted by Brandon at 3:47 PM 1 comment:

Last Sunday I had an amazing technical climb up Mt. Washington with a couple of guides from Timberline Mountain Guides. This was my first, true technical climb with multiple pitches of belayed and short-roped sections. It was a fantastic day and the summit views were outstanding. The total round-trip time was 9hrs with 1 hour on top. It was also nice to finally put some of my gear to real use:

I just finished up playing Alan Wake and the subsequent DLC "The Signal" on the X360. Of course you can get all your review goodness at MetaCritic or GameRankings, but let me do a quick summary.


The Bad
The Ugly
The Truth
Buy this game. Not only will you enjoy it, but it will stay with you long after you hit the eject button.
Posted by Brandon at 12:57 PM 1 comment: