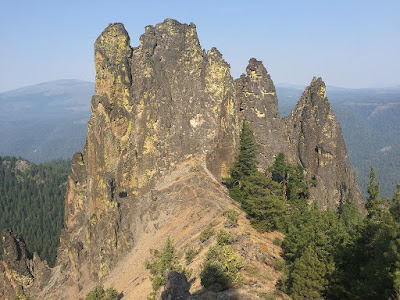 Meet Gothic Rock, an extremely rotten yet beautifully sublime rock formation situated near the Metolius River. I first learned about this formation awhile back when browsing through the classic A Climbing Guide to Oregon by Nicholas Dodge (1975). Once I finally confirmed it's location I vowed to return, despite having any real beta beyond this:

I was also able to locate some basic topo from Northwest Oregon Rock, page 307. The description listed as following:

"From the dirt saddle, descend 100' down right to a ravine that separates the main Upper Tower from the Middle Tower. Proceed up this steep rock ravine for 200' and then angle to the left to a ledge that provides a good viewpoint on the west side. Continue counterclockwise to the SW side and climb the steep rock face to the summit. The rock is reasonably solid with minor loose material. Rappel."

"The rock is reasonably solid..." - um nope, no way, not even close. In fact, we never found a single rock that would qualify as solid (sans the bolted anchors at P2). But let's not get ahead of ourselves...

Last Wednesday Jack and I drove the roughly 55 miles north from Bend. The road is in surprisingly good shape except for the last mile, where it shrinks down and becomes a little more rocky. Jack's Outback drove all the way to the end with no issues to speak of. We parked where the road ends, stepped outside, and was greeted by this: 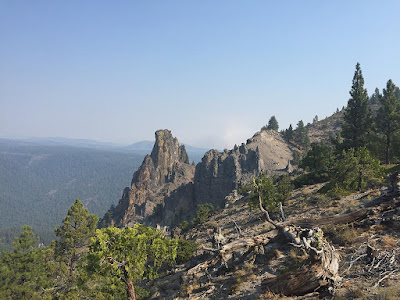 The setting is truly what makes this a special place. Unfortunately, the vista was limited by the huge fire burning across the river in Warm Springs. Typically, you have magnificent views of Mt. Jefferson to the North. Jack and I quickly organized our kit and threw on our packs. We hiked the short approach trail and were standing in front of our route in around 20 minutes. 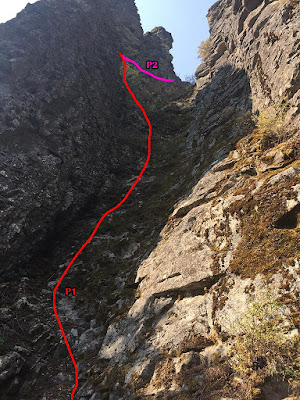 Pitches 1 and 2 could possibly be combined but not having great beta, we chose to break them up. Ascend the moss-filled gully up two-thirds of the way before you can really get in any pro. Said pro will be suspect and for purely mental purposes only. We avoided clipping into a few manky pins, and ran it out where possible.

Basically, you should treat this entire climb as a no fall zone.

Continue climbing up the gully and veer left to a sizable belay ledge. There are couple of old pins a few horizontal cracks that took a #2 camelot. We built our anchor here and double-checked our commitment to seeing this thing out. We both agreed to check out the next pitch before making any decisions.

From the belay we could see some easy ledges as the route disappears around the backside. 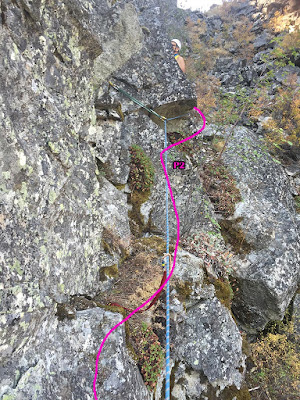 Pitch 2 is a very short upward traverse to the east ledges. There were actually a couple of fun moves in here using a thin finger-crack and smearing around bulges. However that fun was quickly tempered once we discovered the route ducked under a huge death-flake, somehow defying gravity and teetering menacingly over our heads.

We made haste through this section and completed the traverse that finished with an awkward reach-around a large boulder. On the back side of this rock is a nice bolted anchor with new hardware. There's also an additional piece of tattered webbing running out to an old pin. Because shenanigans.

We built the anchor and discussed our options. We could now see the remaining pitch to the summit block. Jack decided to give it a go and took off pretty much directly above the anchor, headed for a gully above. 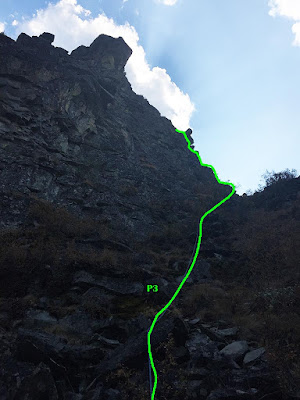 Eerie silence was frequently broken by cursing and shouts of "ROCK!" I tucked into a cleft near the anchor and tried to make myself as small as possible. Jack was treading as lightly as he could, but it was impossible to not send down the occasional missile. After what seemed like a solid 30 minutes, Jack informed me that to continue would be insanity, especially considering that I was directly in the fall line. After a very delicate down-climb, he regained the ledges near the anchor.

Before throwing in the towel, we both agreed that a recon of the backside might reveal another route. Jack scrambled up the loose ledges and reached the exposed east face. This face forms a small areté where it meets the summit block. After evaluating all factors and considering no other viable routes, he decided to go for it.

Jack led a brilliant final pitch that was both extremely cautious and unapologetically ballsy. He continued up the areté and into a weakness in the upper block. The climbing was not difficult but completely mental. Basically it boiled down to choosing the piece that "moved the least amount". We were able to place a couple of smaller cams, but they were dubious at best. Eventually he gained the summit and built an anchor to belay me up.

I followed the pitch cleaning gear and marveling at Jack's fortitude. I've had my share of plenty of Oregon choss, but this place was on a whole other level. Imagine stacks of dinner-plates, precariously balanced on top of each other. Near the crux of pitch three I grabbed for a jug and everything just shifted - feet, hands, etc. I took a deep breath, afraid to exhale on this beast and continued up, eventually reaching Jack and the summit. 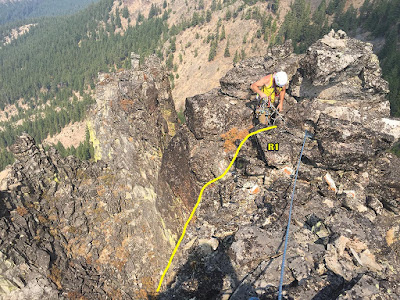 Jack and I looked at each other and sighed with half relief, grateful to be alive but knowing we still
had rappels to complete. The top of the summit is really exposed and not very friendly. Rock plates of various sizes lay haphazardly across each other and are sloped downwards into the gaping exposure.

I belayed Jack across and he started building our rappel station. We lassoed a massive block with a couple of slings and made a pretty bomber anchor, all things considered. After slotting the rope, it was time to go. 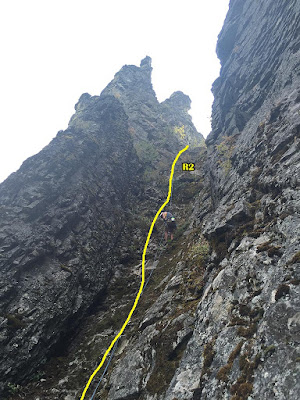 We rappelled back down to the ledges, grateful for not having to dodge dislodged rocks on the way down. The overhanging aspect of this pillar and relatively clean slot definitely helped.

On my way down I passed by several bolts, pins, and draws where desperate people made hasty retreats, leaving what they had in order to bail. Judging from what we saw and experienced, their decisions to escape where absolutely the correct calls. It only got worse above them.

We got back down to the anchors at the top of pitch 2. As we getting ready to setup the rappel, the large ledge Jack was standing on gave way. This started an avalanche of boulders that quickly flooded the chute and exploded into the bottom of the gully. Jacks backpack and Hydroflask bore the brunt of the destruction and somehow survived with only a broken buckle and dents.


We exchanged a glance without words. The only option was to continue down as fast (and safely) as possible. After finishing our raps, we collected gear and headed back up to the car. Once there, we celebrated the ascent with a couple of cold IPAs. 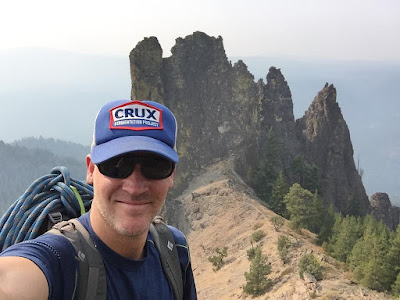 Facebook
https://www.facebook.com/yearinreview/brandon.simonds
Posted by Brandon at 9:52 PM No comments:

Here's a short film I made about my North Sister climb.
Posted by Brandon at 7:47 AM 21 comments:

There's a map for that? 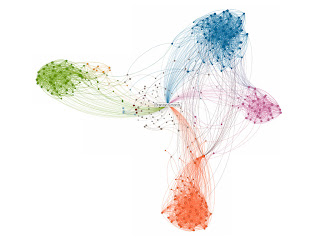 You can make your own here: http://inmaps.linkedinlabs.com
Posted by Brandon at 10:20 AM 3 comments:

I can check the box next to another Oregon spike, Mt. Thielsen.

Yesterday a group of us from Cascade Mountaineers submitted the 9,184 ft. peak and next-door neighbor to Crater Lake. We had an amazing window of weather; sunshine with not so much as a breeze. Even after copious amounts of sunscreen application, my face still got obliterated. The total car-to-car time was around 11 hours, certainly on the slow end of things. However we had a mixed group with a few people dropping out near the top due to fatigue or not feeling it. We also had another delay at the summit pinnacle as we waited for a four-person group to finish belaying. All in all, it was a great climb in a beautiful area. 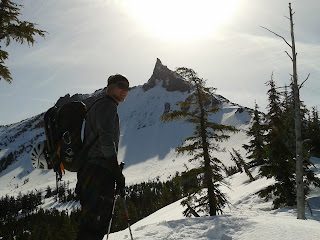 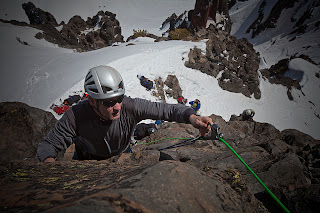 Check out the photo gallery to see more pictures from the trip.
Posted by Brandon at 4:12 PM No comments:

Email ThisBlogThis!Share to TwitterShare to FacebookShare to Pinterest
Labels: mountaineering

I've been using Trello for about a week now on a small indie project. I gotta say that I really love it's ease of use and accessibility. I'm not sure how it would work for large, distributed teams, but it's proving to be a great collaboration tool for us.
Posted by Brandon at 6:01 PM No comments:

Email ThisBlogThis!Share to TwitterShare to FacebookShare to Pinterest
Labels: technology